The symposium will be held at the Kashiwa Research Complex Conference hall on the University of Tokyo campus in Kashiwa (Building 15 on the Campus map). Kashiwa is located about 10 km northeast of Tokyo (Chiba Prefecture).

For train and bus transport, most lines (including the local buses in Kashiwa) will accept the Suica or Pasmo IC Cards, which allow payment of fares by tapping a card reader. Either Suica or Pasmo cards can be purchased and recharged at most train stations and at the airport. Some express trains will require the purchase of an additional express fare ticket beyond the base fare, so simply tapping your IC card will not be sufficient. Local Tobu buses from Kashiwa or Kashiwanoha Campus Stations and from/to the airport also accept the IC cards. You simply need to tap the card readers when entering and exiting the bus. You can print a receipt of spent fares (e.g. for reimbursement of individual trips) at any machine where you can recharge the cards.

There are two airports that service the Tokyo area, Narita airport and Haneda airport. We do not recommend to take a taxi from the airport to your hotel near Kashiwa campus or the symposium venue. From Haneda and Narita airports, taking a direct bus to Kashiwa-no-ha Campus station (about 1.5h trip) is most the convenient way. You can check timetables here:

or directly ask at the bus information desk at the airport. Please note that there may be buses only once an hour or less. Alternatively, you can take the subway/train through the city center and then Tsukuba express to Kashiwa-no-ha Campus station (operates more frequently and takes about the same time as the direct bus, but requires transferring at least two times):

The nearest station to Kashiwa campus is the Kashiwa-no-ha Campus station. This station is convenient for those who stay at Mitsui Garden Hotel Kashiwanoha, Hotel Del Prado or Hotel Sunoak Kashiwanoha. Kashiwa Campus is 20 minutes walking distance from the station.

From this station, there is a shuttle bus provided by the University of Tokyo, which is free of charge for visitors.

It is also not difficult to find a public bus transportation from Kashiwa-no-ha Campus station, see the public bus route map around Kashiwa campus. Take either #03 or #04 bus from the bus stop #1 at the West Exit of the station and get off at National Cancer Center ("Kokuritsu Gan Senta"). You can also take #10 bus at the same bus stop and get off at Todai-Mae.

Kashiwa station is convenient for those who stay at Crest Hotel Kashiwa, Kashiwa Plaza Hotel, Sotetsu Fresa Inn Chiba-Kashiwa or other hotels in central Kashiwa. Take either #44 or #01 bus bound for National Cancer Center from the bus stop #2 in front of McDonald, West Exit of JR Kashiwa Station and get off at Todai-Mae or the last stop.

You can walk from the Sunoak hotel to IPMU along the Kashiwanoah Park in about 30Min (see map below) or walk to the Kashiwanoha-campus Station (7min) and take a bus from there (see above). 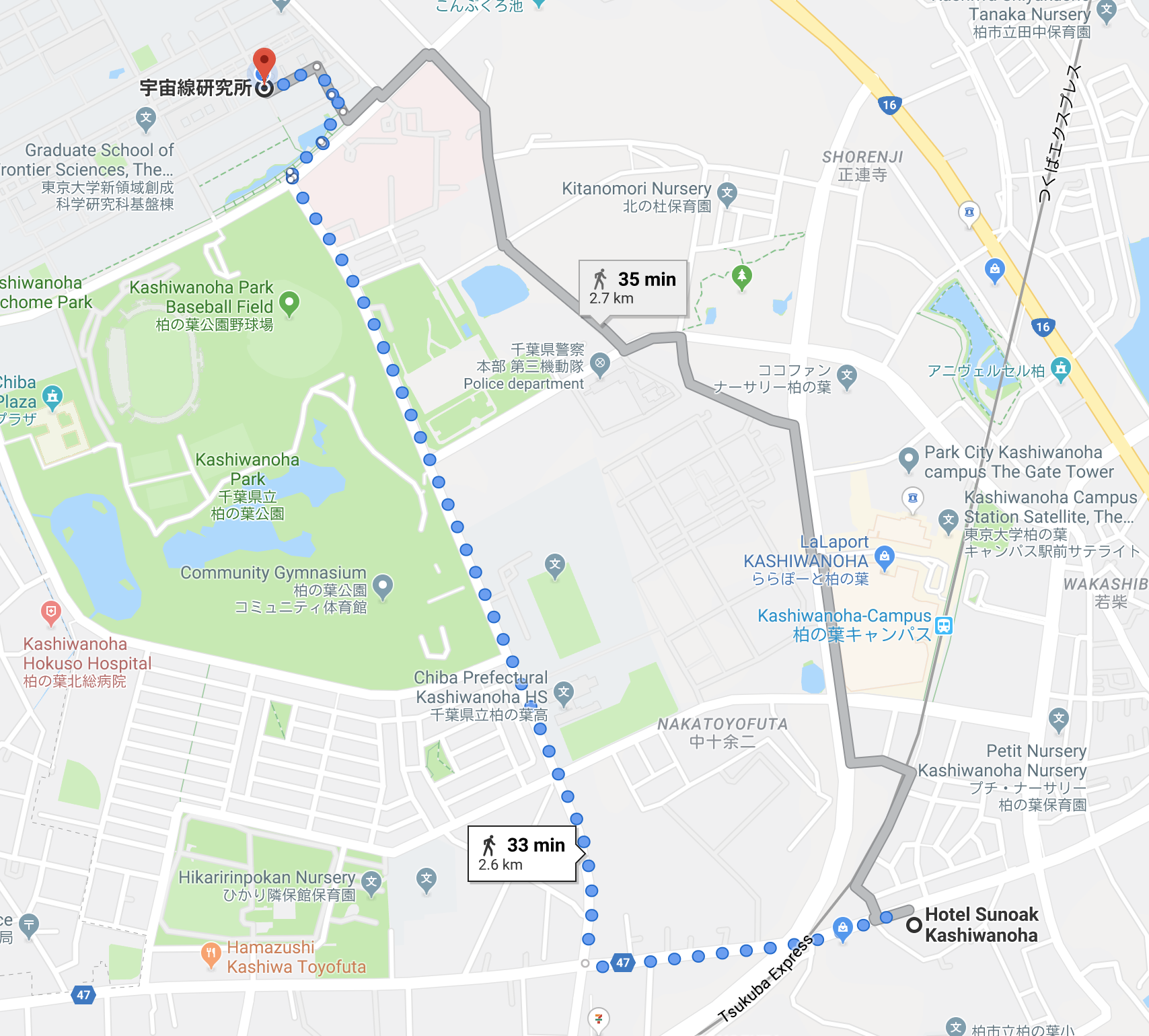